Petit Jean State Bank was established in 1999 when a group of local Conway County business leaders recognized the need for Morrilton and Conway County to have a locally-owned and managed bank. In just 59 days, the organizers had influenced some 300 additional investors to commit to the new bank.

Petit Jean State Bank opened its doors on February 16th, 1999 in a building at 707 North St. Joseph Street in Morrilton, Arkansas that was originally built and occupied by AP&L. Having been remodeled and improved over time, it remains Petit Jean State Bank’s main office.

In 2009, on our 10th anniversary, we opened our full-service University Branch at 1620 University Boulevard to serve the needs of our expanding customer base and our community.

Petit Jean State Bank ATMs are located at both banking facilities and in the lobby of CHI St. Vincent’s Hospital in Morrilton.

Petit Jean State Bank is regulated by the Arkansas State Bank Department and The Federal Reserve Bank, and deposits are insured by the FDIC.

From its organization, Petit Jean State Bank’s mission has been to be the premier widely-held independent community financial institution in the region we serve, and “…to excel in creating value for our customers, employees, shareholders  and communities by providing superior financial service in a safe, sound, and non-discriminatory manner”. We have remained true to that mission and are proud to be the only hometown bank in Morrilton and Conway County, or best said as being “Right In Town, Right In Touch”. 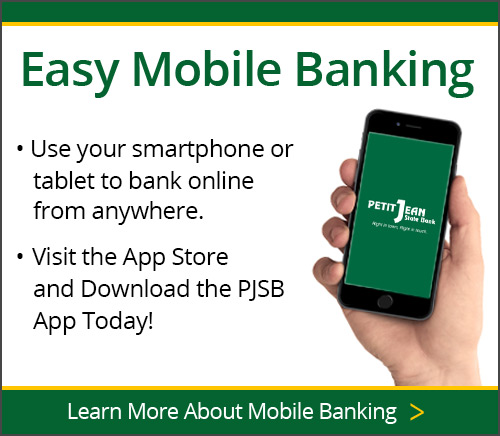 Deposit checks with a snap

If you don't have the FREE PJSB App,
download it today! 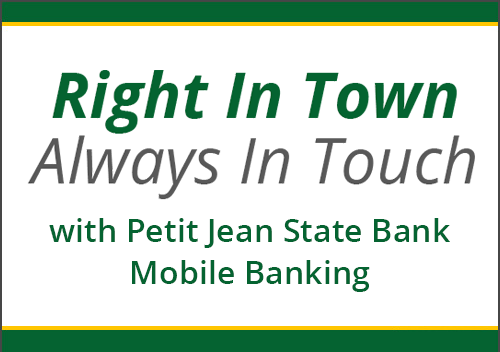